JLN-550 Doppler Sonar is designed to provide ship speed information with higher stability in the dual frequency modes; one using a lower ultrasonic frequency that is adequate to measure the ship’s speed against the ground  up  to  larger  depths  and  the  other  using  a  higher  ultrasonic frequency that allows the ship’s speed against the water to be measured even in water with tiny bubbles.

The transducer is designed for dual-frequency transmission, but its size is smaller than the conventional models.

The transducer is substantially downsized, allowing it to be installed on the bow side that is little affected by bubbles.

An underwater-mateable connector is adopted for the transducer, so that a transducer can be replaced at a quay even in case of its failure.

The  equipment  is  provided  with  an  additional  function  of  indicating  the  ship’s  fore  and  aft speeds and port and starboard speeds by entering GPS information.

The  ship’s  port  and  starboard  speeds  at  its  arbitrary  position  can  be  indicated   by  entering ROT information.

An optimal Doppler sonar system can be configured by combining a variety of options. On-line maintenance (option) allows any failure to be detected during navigation. 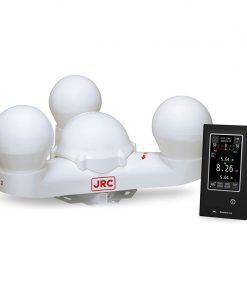